The Hon. Roger Cosbey, retired Magistrate Judge for the U.S. District Court for the Northern District of Indiana, will present “The Lincoln Assassination Conspiracy Trials & Their Aftermath,” an exploration of the trials of the eight conspirators arrested after President Lincoln’s assassination and their outcomes. 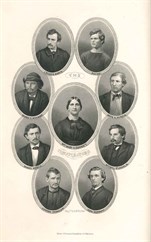 About Hon. Roger B. Cosbey

Roger Cosbey is a former federal magistrate judge for the United States District Court for the Northern District of Indiana. He was first appointed to a renewable eight-year term as a magistrate judge in 1990. He was reappointed in 1998, 2006 and 2014. Judge Cosbey retired from the bench on January 15, 2015, and now resides in South Carolina.

Judge Cosbey received his B.A. degree from Western Michigan University in 1972 and his J.D. degree from the University of Toledo in 1975. He is also a 1987 graduate of the Indiana Judicial College.